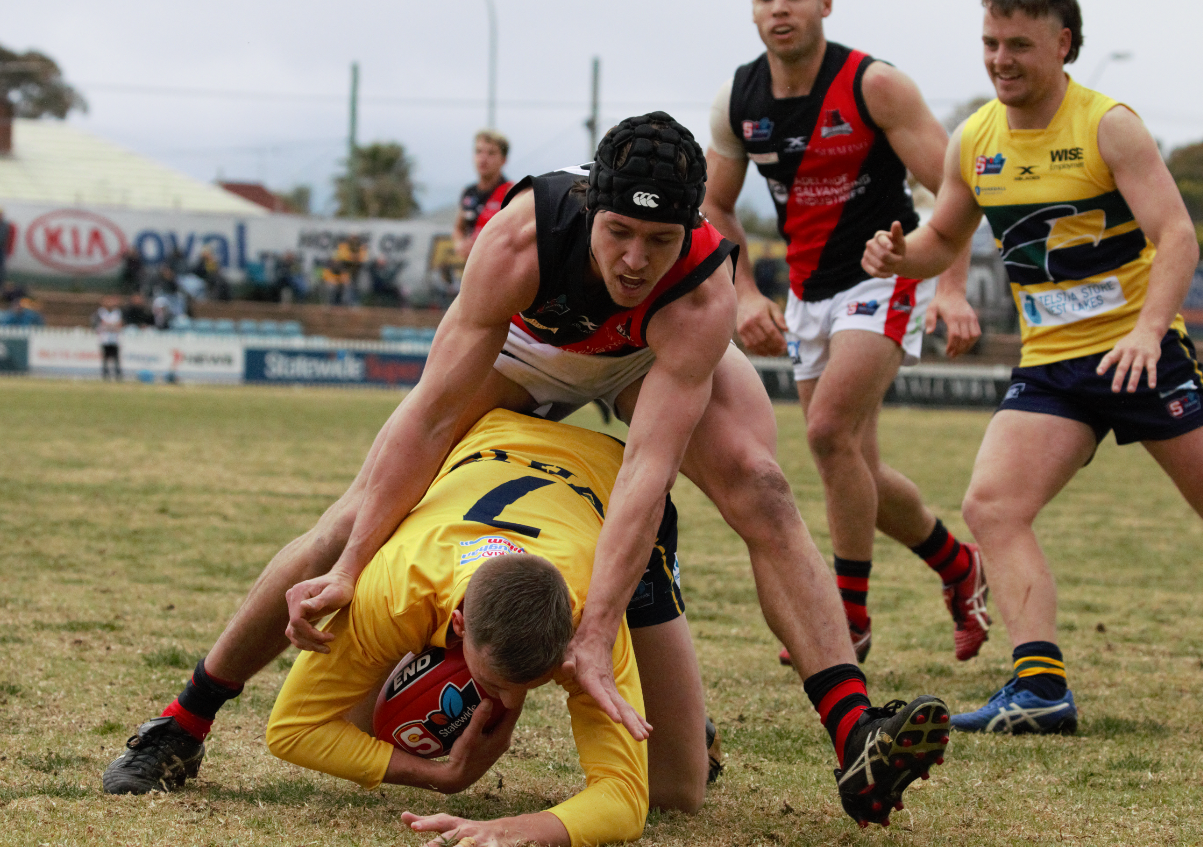 It was far from pretty but Woodville-West Torrens continued on its pacesetting trend by accounting for West Adelaide by 48 points at Maughan Thiem Kia Oval.

Stringing together their sixth win in succession, the Eagles overcame their inaccuracy in front of goal to secure another two premiership points.

Still without a trio of key players in last year’s Club Champion Jordan Foote, captain Luke Thompson and veteran Matt Goldsworthy, the hosts looked in control throughout the afternoon as they engineered 23 scoring shots to 10 and 46 inside 50s to 30.

With the Hayes brothers – Jack and Nick – dominating the air with 20 marks between them, the Eagles didn’t waste time asserting themselves on the Bloods with the opening two goals to goalsneak James Rowe.

Rowe, in the early frame to win this year’s Ken Farmer Medal, produced two pieces of lovely crumbing play to first boot a checkside in traffic before evading two would-be tacklers to snap truly from 35m.

West’s Brett Turner and former Glenelg forward Josh Koster both kicked goals on the siren at the first and second change respectively to give their side a faint sniff with a 14-point deficit at the main change.

But while the scoreboard wasn’t showing it initially, the Eagles dominance was starting to evolve as they had 13 scoring shots to four at half-time, Nick Hayes left to rue costly misses en route to tallying six behinds.

The scoreboard pressure came for the Eagles in the third term as the reinvigorated Jake Von Bertouch, Rowe and mature-age forward Tristan Carcuro booted the first three goals.

Carcuro, plucked from Sacred Heart Old Collegians in the off-season, was on his way to cashing in after booting another three in the final term to equal Rowe as the leading goal kickers in the match with four each.

It enabled the Eagles to gain valuable percentage late in the contest, ensuring they would remain at the top of the ladder ahead of second-placed North Adelaide, who defeated Sturt at Prospect.

Eagle Jack Hayes finished with 24 disposals to again be one of the dominant figures on the ground while Chris Hall and Jimmy Toumpas, who had 47 possessions between them, were particularly constructive with each touch.

Vice-captain Joseph Sinor finished with 21 disposals and a nice set shot goal from just inside the 50m arc while Lachlan McNeil had another consistent display after being announced as the Round 6 Powerade Breakthrough Player earlier in the day.

Port Adelaide Next Gen Academy prospect Lachlan Jones started the game brightly for the Eagles with an array of intercept marks and crunching tackles before tallying 17 disposals and five marks.

The Bloods handed League opportunities to William Mead and Tom Morrish for the first time but it was experienced campaigners in Kaine Stevens (30 disposals and seven clearances) and Aaron Anderson (29 disposals) who led the charge.

Crows SANFL recruit Jordon Boyle was again among the ball-winners for West with 23 while Brett Turner continues to show promise in his midfield role with 22 touches and a set shot goal on the quarter-time siren.

Usual key forward Lyndon Hupfeld was swung into defence to positive affect, with the Bloods bigman finishing with 20 disposals and eight marks.

Glenelg snuck into the top four with a much-needed 33-point win against Central District at X Convenience Oval.

Banking the premiership points for the second week in succession, the Bays’ experience and willingness to apply defensive pressure proved too much for the Bulldogs to overcome.

Unearthing another AAMI Rookie in Luke Edwards – son of Crows premiership defender Tyson – the visitors broke the game open in the third term with five goals to Central’s one.

Glenelg used the ball more regularly by foot – 231 kicks to 192 – as it controlled the tempo when required by switching the play and possessing the footy with 118 marks to 68.

But it was Mark Stone’s group who piled on the pressure with 66 tackles to the Dogs’ 50, forcing them into too many handballs, which ended up being one of the few stat categories the hosts would win by 142 to 121.

The Tiger forwards had plenty of space to work with when the ball was switched and moved with purpose, Liam McBean booting four goals from eight shots while also working hard further up the ground to notch 19 disposals, seven marks and four tackles.

Leading by just nine points at the main change, the Tigers booted three of the first goals in the third quarter to open up a 22-point buffer when Magarey Medallist Luke Partington finished off his contested mark in a one-on-one contest.

Improving Tiger Jack Yates didn’t have to break stride when ruckman Jack Hannath fed him a handball before finishing on the run from 25m.

The margin soon opened up to a match-defining 36 points when premiership wingman Carl Nicholson redeemed a missed set shot by intercepting and snapping truly from 20m.

McBean’s third major stretched the advantage out by as much as 49 points six minutes into the final term but the Dogs regained some respect on the scoreboard to put Glenelg on notice with five of the next six goals.

But another pair to McBean during time-on of the fourth term ensured the reigning premier would secure its fourth win of the season and regain its place in the top four for 24 hours before South hosts Norwood on Sunday.

Partington was influential with his 31 disposals, five clearances and two goals while Jack Oatey Medallist Matt Snook was again in the thick of the action for 29 disposals, six tackles and 10 clearances.

Veteran Brad Agnew was tough in the clinches as usual for 27 disposals and eight clearances while Carl Nicholson had 22 disposals and his clever snap on goal.

Ruckman Jack Hannath – playing against his old side for the first time at Elizabeth – had his best game for his new club, racking up 20 disposals, five marks and 29 hit outs, many of which were directed straight to his teammates.

Defensively, captain Max Proud and first-year player Luke Parks took 17 marks between them several of them being intercepts as the Bulldogs charged forward.

Luke Edwards – eligible to be selected as a father-son for the Crows – was composed on debut for the Bays with 10 disposals, before leaving the game with a couple of minutes to play after copping a knock to his head after effecting a smother.

Central – reduced to 21 men after Nick Lange didn’t emerge after half-time due to injury – never lost its spirit to hang in the game, as evidenced by outscoring Glenelg in the final term.

Travis Schiller is back to his best after his off-season foot surgery, racking up a game-high 38 disposals, nine clearances and five tackles while James Boyd and Troy Menzel also surpassed 30 disposals.

Menzel’s willingness to work back into defence has been noticeable this season as the former Crow also took 13 marks.

Late VFL recruit Jack Toner, who collected 21 disposals for the Dogs, tried hard to construct play from the back half while Murray Stephenson snared an eye-catching one-handed mark as his side made a desperate charge late in the game.

North Adelaide won its dogged contest against Sturt by 19 points after just two goals were scored in the first half at Prospect Oval.

Despite conditions being relatively clean for the afternoon, the Roosters took only a six-point advantage in at the main change after leading the Double Blues by 1.9 (15) to 1.3 (9).

But seven goals in the third quarter put Jacob Surjan’s charges on the path to victory whilst also restricting Sturt to just two as they led by 38 points at the final change.

The visitors suddenly had a sniff until time-on of the third stanza, when North did the damage with four goals late in the quarter.

First-year midfielder Will Combe, former Carlton rookie Kym Lebois and premiership forward Robbie Young all made their shots on goal count in succession.

Once third-gamer Harrison Magor kicked truly 29 minutes in, the hosts had the grandstand rocking behind a match-winning 37-point lead.

Despite it being North’s last goal of the game, the Roosters were able to keep Sturt at bay during the final term as Nathan Grima’s men kicked the only three majors for the quarter.

North defender Cameron Craig was outstanding for his side, racking up 29 disposals and taking 14 marks including an eye-catching contender for Digital Pass Mark of the Week.

Former Crow Harrison Wigg used the ball well for his 31 touches and ten marks to be another huge influence on the result.

Vice-captains Andrew Moore and Tom Schwarz led the battery of midfielders for the Roosters, who managed 20 more inside 50 entries for the match.

Campbell Combe and Jarred Allmond were other strong contributors while Lee Minervini had one of his best League games in the red and white to register 18 disposals and four tackles.

Magor had 14 disposals to go with his goal while premiership forward Keenan Ramsey worked hard on a day not suited to forward to register 14 disposals, 10 marks and a goal.

The Double Blues’ had captain James Battersby again leading the way with 32 disposals, eight marks and seven clearances while Sam Colquhoun had 27 touches and 10 marks.

Abe Davis seems to have found his regular place in the midfield after initially being trialled as a key forward, finishing with 31 disposals, six marks, five tackles and seven clearances.

Power recruit Aidyn Johnson lifted his output to tally 22 disposals for Sturt while Steven Slimming ran hard for his 21 touches and a goal.